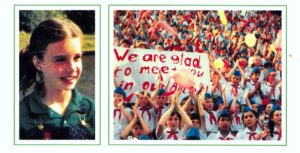 The current situation in Ukraine has brought the war to a level where no-one can ignore the danger of a nuclear apocalypse.

The United Nations and several countries have asked for negotiated settlement.

President Biden has not embraced this approach and the United States continues with a military answer by sending arms, equipment and money.

In 1982, her story and the results of the letter she wrote to Yuri Andropov are recorded in the book “Journey to the Soviet Union”.

This was the beginning of the end of the cold war between the United States and the Soviet Union.

Today we call on young people throughout the world to write letters and use modern technology and social media to contact and appeal to President Biden and President Putin asking for an immediate ceasefire and negotiations.

When the leaders agree this will be the beginning of the possibility of peace.

“Sometimes I still worry that the next day will be the last day of the earth. But with more people thinking about problems of the world, I hope that someday soon we will find the way to world peace. Maybe someone will show us the way.” (Samantha Smith)

I am writing this letter to offer an alternative plan to end the violence in Ukraine.

I have studied, practiced, and educated people about violence and the alternatives of non-violence throughout my lifetime.  Human nature teaches that a person pushed into a corner usually comes out fighting.  This is exactly what is happening with President Vladimir Putin.  He has no way to get out of his war respectfully, so he continues the war with chaos, and the threat of nuclear war.

I suggest we revisit what Samantha Smith, a 10-year-old girl from Maine, did in 1982.  Samantha wrote a letter to the Soviet leader, Yuri Andropov, asking him for peace not war.

She was invited to the Soviet Union and made friends with many young people who remained her friends.

“Journey to the Soviet Union” is the book that describes how Samantha’s initial small step led to a greater understanding between people in the United States and Russia. Although Samantha Smith’s life was cut short at age 13 due to an airplane accident with her father, her example and words live on:

“Sometimes I still worry that the next day will be the last day of the earth.  But with more people thinking about problems of the world, I hope that someday soon we will find the way to world peace.  Maybe someone will show us the way.” (Samantha Smith)

The world is facing a similar situation with the war in Ukraine and needs Samantha Smith’s inspiration. CBS is planning a podcast show featuring Samantha ’s extraordinary life and her journey to the Soviet Union.

What if all young children wrote letters to President Putin asking for peace?  This might offer him a way out of the war he has created.

What if a massive social media campaign were started?  If the world saw, and got behind this plea, it might make a difference.

Our children, the children of the world, are the future. They deserve and need us to help them believe there will be a future. Taking action has the potential to create great change.  Today I encourage all children to follow Samantha by answering the call and changing the future by requesting President Putin to stop the war.

If this has meaning for you, I ask you to join “Children’s Project for Peace” and write to President Putin and President Biden.