AERA (August 10, 1995)－A commemorative issue published in the 50th year after the war 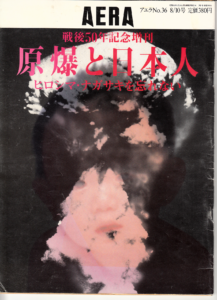 On the cover, do you see a shadow of a child’s face that AERA superimposed on an image of the mushroom cloud taken by the US Air Force 76 years ago? We found a copy of this commemorative issue of the weekly magazine, AERA (August 10, 1995), on the website of “Academy,” a long-established secondhand bookstore in Hiroshima.

This magazine titled “Genbaku to Nihonjin: Hiroshima Nagasaki o Wasurenai” in Japanese (The Atomic Bombs and the Japanese: We do Not Forget Hiroshima and Nagasaki), should be preserved in perpetuity on our bookshelf.

It contains ample photography of heavy casualties, taken just after the bombing, and living necessities, including lunch boxes left by the teenager victims. They show gruesome circumstances in Hiroshima and Nagasaki in 1945.

In August, 1995, photographs and atomic bomb artifacts were to be exhibited at the Smithsonian Air and Space Museum together with the Enola Gay, the B-29 bomber that had dropped the atomic bomb on Hiroshima. However, the plan was canceled on January 30, 1995, due to the opposition by veterans’ organizations, lobbyists, and congresspersons. Finally, the museum exhibited only the B-29 bomber. (See Harwit, Martin. An Exhibit Denied. Copernicus, 1996. p. 434).